May has quite a few shifts in energy for us. We’re going from the passive and emotional Pisces pileup to a decisive and courageous assembly in Aries.

May has quite a few shifts in energy for us. We’re going from the passive and emotional Pisces pileup to a decisive and courageous assembly in Aries. Jupiter, Venus, and Mars are all moving into Aries this month, and everything is about to speed up very quickly. Because of all this Aries energy, this forecast may seem a bit repetitive so I’m going to try my best to avoid that.

In order to get a deeper understanding of this month, keep your eye on the Aries house in your personal birth chart and/or business chart! It’s going to get a ton of focus, there’s going to be a concentration of energy in this one area of your life and business.

The New Moon eclipse shouldn’t be too gnarly but the one in May could feel a bit more uncomfortable. Try not to launch anything too major around these eclipses; things are disappearing and reappearing completely out of our control. It’s best to just let the eclipses do their thing and to let the magic happen on its own.

We’re also getting the second Mercury retrograde of 2022 in May, it begins in Gemini but ends in Taurus.

Now that we understand the general landscape, let’s chat through the month in more detail!!

The first Aries ingress will be Venus moving into Aries on May 2. We’re shifting from the dreamy Piscean Venus to a loud and expressive Aries Venus. We’re getting bold and courageous, ready to do whatever it takes to prove you can make pretty things.

Venus’s expression changes quite a bit; we’re courageous and comfy with going wherever our intuition is taking us. We’re following our passions and expressing our values unapologetically. What are your business values? The connections and collaborations you’re involved in – do they truly reflect what you believe in? This is a fabulous time to get clear on that and to take the steps you need to in order to get back in touch with the things that are truly meaningful and important for your business. Once you are clear on what this means for your biz, shout it to the mountain tops!

Then on May 10, Mercury will come to a halt and station retrograde at 4° of Gemini. Things begin to slow down, communication gets funky, things get lost in translation, and revisions are begun. Embrace this time, make space, and allocate resources for any mishaps. Try to get ahead of things if you can, especially anything involving transportation/travel, shipping, sending important messages, and technology. If you can’t avoid it, be sure to remind yourself to take your time; if something doesn’t go the way you need it to the first time, take a break, and revisit the issue later.

On the following day, May 11, Jupiter is going to leave Pisces and ingress into Aries for a little over 5 months. I’m so excited for this transit.

Let’s break this down a bit – Jupiter is the planet of growth, optimism, faith, experiences, and sharing. Aries is a cardinal fire sign ruled by Mars (who will be meeting up with Jupiter at the end of the month). When Jupiter is in this part of the sky, we’re finding the courage (and receiving encouragement from others) to begin a new chapter that inspires us to trust our decisions and to act upon our intuition.

Jupiter has a nice time in Aries; he doesn’t have a ton of responsibilities because he doesn’t have rulership over Aries, but Jupiter is a triplicity lord for the Fire signs (Leo, Aries, Sag). Jupiter loves being in fire signs, triplicity lords have a sense of communal support from the house they’re in. So, for this transit, Jupiter won’t need to be super responsible keeping Aries in check. Instead, Jupiter will be inspired, lit up, and encouraged to do Big Things. We’re not just dreaming anymore; we’re breaking ground to begin the process of actualizing those dreams. We’re kickstarting this process and putting as much energy as we can towards turning our fantasies into reality.

Because Aries is a cardinal sign ruled by Mars, we may begin to witness rapid growth in the Aries house of our charts. If you have had any ideas or new directions you’ve been wanting to take your biz, this will be a great time to do so. But don’t forget we’ve got 5 months of this transit so don’t worry if you can’t get it all done in May!

A few days later on May 15 we’re going to get our second eclipse, the Full Moon in Scorpio at 25°.

This eclipse isn’t very fun for a few reasons; the first being that the moon really does not like being in Scorpio, the second is that Mars is ruling this eclipse and Mars is still in Pisces during this time applying to Neptune which can make things confusing and unclear, the third is that the Moon is also making an aspect to Saturn which the moon really does not like.

Since it’s a full moon, the earth is going to pass directly between the Moon and the Sun. The moon will get devoured and swallowed up by the earth even though it was supposed to be huge, bright, and beautiful. In our lives and businesses, this could manifest as us releasing some of our creations and emotional attachments into the ether. We’re being called to let go of things, but it’ll be tough for this fixed water sign. Scorpio likes to collect the various emotional complexities of life but this eclipse is going to kickstart the process of draining the unnecessarily complicated things we’ve been holding onto.

This eclipse may give us insight as to what’s not working, it’s the first chapter in a story that will pick back up in the fall.

Two days later, Mars conjoins Neptune in Pisces. There’s nothing particularly too notable about this but this could be a good transit for working on cutting down video content and getting batch editing done. When planets interact with Neptune, I always find myself and others with interests in video content working with it more extensively than we would otherwise. If that’s something of interest to you, give it a shot! But also be sure to triple save your work!

On May 21, Mercury will meet up with the Sun again and will be cazimi-ed at 0° of Gemini. We may have some aha moments on this day, we may begin finding the solutions to problems that began arising during the retrograde. On the following day, Mercury will retrograde back into Taurus and continue to work on revising everything we explore during mid-late April. Check-in on both your Gemini and Taurus houses in your birth chart to get a clearer understanding of what areas of life this retrograde will call you to review. Maybe the retrograde begins in your 3rd, house but then carries out in your 2nd, this could be the process of rethinking the skills you need to run your business effectively but then once mercury is in your 2nd it could call you to reflect on how these skills are actually making you money. It could also call you to analyze whether or not your learning these skills is actually worth the money.

On May 24, Mars will leave Pisces and meet up with Jupiter in Aries. This is the first time Mars has been in Aries since the retrograde back in the fall of 2020. We’re hitting the gas and we’re steamrolling ahead as fast as we possibly can. We’re reallyyyy getting things done now. Nothing is holding us back! Unlike Jupiter, Mars does have rulership over Aries so mars will be responsible for the chaos we initiate during this time. We’re finding the drive and motivation to start checking off the things on our to-do list. This transit may primarily impact your Aries and Scorpio houses (Mars rules both Aries and Scorpio).

To cool things out a bit, Venus will leave Aries and ingress into Taurus on May 28. Venus in Taurus will stabilize the volatile energy we’ve gotten up until this point, settling down and cooling things out after the eclipses. Venus is at home in Taurus, so she answers to herself. She’s calling us to tap into what our businesses need physically in order to feel good. What tools could be incorporate to re-establish a sense of stability and consistency? How can we heal and assuage the chaos that happened with Venus in Aries? How can we settle things down so we feel better, confident, and capable in our Venus houses?

On the following day, Mars and Jupiter will kiss at 3° of Aries. All the energy we’ve been chatting about will culminate on this day. We’re going to be overwhelmed with courage and we’ll have a huge dose of faith to do everything our hearts desire. We’ll be certain that anything we want to do is totally possible and we’ll also have the desire to prove to everyone that we can indeed do the big things we said we would.

To close out the month on May 30 we’re going to have a New Moon at 9° Gemini. The first Gemini lunation since the Gemini/Sagittarius eclipse cycle of 2021. It’ll be nice to begin making space for new connections and implement various methods of communication – maybe you find a new platform for email marketing, or you come across an audio transcriber. Keep your eyes peeled for some new systems and communication platforms to help set you and your business in the right direction.

Be sure to check the event calendar for May 2022 and join in for co-working, clarity calls, and more. 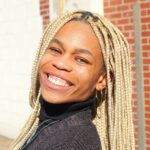 Déjà Lewis-Nwalipenja is a traditional astrologer born, based, and raised in Philadelphia, PA. She is deeply passionate about developing a life philosophy using astrology, transformative justice, and creative expression. Déjà has been practicing astrology professionally for almost 2 years and recently began focusing on Vocational astrology and Social Media Marketing for other astrologers and spiritual practitioners.

Creator: Get Online, Witch!
Supporter of service based solopreneur witches, tarot readers, astrologers, herbalists & healers out to change the world.

This website uses cookies to improve your experience while you navigate through the website. Out of these, the cookies that are categorized as necessary are stored on your browser as they are essential for the working of basic functionalities of the website. We also use third-party cookies that help us analyze and understand how you use this website. These cookies will be stored in your browser only with your consent. You also have the option to opt out of these cookies. But opting out of some of these cookies may affect your browsing experience.

Necessary Always Enabled
Necessary cookies are absolutely essential for the website to function properly. These cookies ensure basic functionalities and security features of the website, anonymously.
Functional
Functional cookies help to perform certain functionalities like sharing the content of the website on social media platforms, collect feedbacks, and other third-party features.
Performance
Performance cookies are used to understand and analyze the key performance indexes of the website which helps in delivering a better user experience for the visitors.
Analytics
Analytical cookies are used to understand how visitors interact with the website. These cookies help provide information on metrics the number of visitors, bounce rate, traffic source, etc.
Advertisement
Advertisement cookies are used to provide visitors with relevant ads and marketing campaigns. These cookies track visitors across websites and collect information to provide customized ads.
Others
Other uncategorized cookies are those that are being analyzed and have not been classified into a category as yet.
SAVE & ACCEPT
Powered by